This little boy is making a big difference— and he's useing polymer clay to do it! 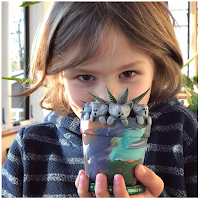 Owen is your typical 6-year-old who lives in Massachusetts. He’s a real lover of animals. His favorite is the raccoon. Owen enjoys playing in his treehouse, visiting the beach, and building with his Legos. But recently, he learned about the devastating fires in Australia and decided to do something to help. PcPolyzine contacted Owen’s mom, Caitlin, to find out more:

pcPolyzine: How did Owen learn about the fires in Australia? How did he react?
Caitlin: Owen lived in Australia for a few months as a toddler and has been asking to go back for a visit. I told him it wasn’t a good time to visit because the bushfires are so bad this year. He asked if any hoes had burnt down. I answered, “Yes, about 2000”. He then asked if any animals had been hurt. I answered, “Yes”. Then he asked, “2000?” I had to tell him it was a lot more than that. He got really quiet and went away to draw for a while. He was visibly upset, so we wanted to give him an outlet to feel less helpless.

pcPolyzine: What do you think triggered his reaction to the news about what’s going on there?
Caitlin: Owen’s dad grew up in Australia and Owen lived there for a few months as a toddler. I think Owen would be upset about fires hurting people or animals anywhere, though— he’s very caring.

pcPolyzine: Tell us about how you all came up with the idea to create clay koalas.
Caitlin: Owen and I were using oven-bake clay a lot during the summer. I had a project going and he enjoyed working next to me making little characters. One of the characters we came up with was a cat that sat on the edge of a flower pot. The koala was born out of this idea. We also figured a koala was easier to make than a kangaroo and more recognizable than an echidna.

pcPolyzine: Do you (or someone you know) work with polymer clay? How did you decide that was the best medium?
Caitlin: I needed a very specific sized pot for a project over the summer—when I couldn’t find it, I went to our local Michale’s and picked up some Sculpey so I could make the pot myself. It was really easy to work with and Owen enjoyed making characters beside me.

pcPolyzine: What charity are you all linked with for the proceeds of the koalas (and other donations)?
Caitlin: 100% of the donations to Owen’s GoFundMe, “Owen’s Australian Creature Rescue” go to the Wildlife Rescue South Coast Inc.—a volunteer organization helping house and feed animals displaced by the bushfires.

pcPolyzine: Caitlin, thank you so much for taking time to share Owen’s story with us and for inspiring him to be so caring!

Donations to help care for and save animals impacted by the fires in Australia can be made to Owen’s GoFundMe campaign.

Stay in touch with us:

Are you looking for something?

Stay in touch with us